Minera Lead Mines and Country Park has an interesting history dating back centuries. Groundwork North Wales in Partnership with Wrexham County Borough Council now run and manage the site. Thanks to funding from the Heritage Lottery, Groundwork North Wales have reopened the visitor centre and are running events and activities that incorporate the natural landscape informing participants about the areas’ rich heritage.

A History of Minera Lead Mines

People have mined for metals at Minera since at least the Middle Ages (the English name Minera comes from the mediaeval Latin for mine or ore). The first written reference to mining at Minera dates back to 1296 when miners from Minera were sent to Devon by Edward I to work his silver mines.

Mining at Minera has often been problematic throughout the centuries. Black Death stopped work as there was a labour shortage, Owain Glyndwr scared off the English mineowners at the start of the 15th Century while in Henry VIII’s time, Sir Charles Brandon tried to blame his workers when his mining venture at Minera failed.

In the 16th century, local landowners and merchants regularly tried to get the lead mines working but were rarely successful and it wasn’t until the 18th century that boom times began at Minera.

In the late 18th Century prospectors had learned how to find the underground reserves of lead. However, deep 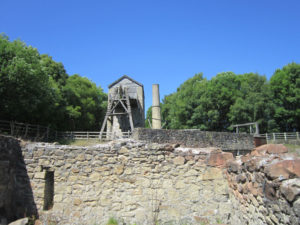 mining had its problems because of flooding as lead veins are in limestone and limestone means underground rivers. Pumping water out was very costly and a major obstacle to any successful deep mining for lead.

The man with the solution was John Wilkinson, an entrepreneur and the brains behind nearby Bersham Ironworks. The main product of the Ironworks was producing cannon and steam engine cylinders.

Bersham was the first site in the world to use a new way of boring holes in cannon and steam engine cylinders. Wilkinson’s used these steam engines to keep the Minera mines free of water and Lead mining at Minera was once again profitable.

However, Wilkinson copied the design of the well known Boulton and Watt steam engine .He did not tell Boulton & Watt that he had copied their design , and when they found out Wilkinson had to pay up.

This and other problems led to a decline in mining at Minera over the next few decades.

By 1845 John Taylor & Sons, mining agents from Flintshire, formed the Minera Mining Company. They had the experience and knew Minera’s lead mines had potential. They consolidated the mining leases, put in a new drainage level from Nant Mill to get water out of the mines and invested in new engines and a new railway line. In 1852 lead ore was, once again, being mined at Minera.

The miners discovered new reserves of lead even deeper underground and it was boom time. The Taylors started off with £30,000 to invest in their mining venture and the profits for 1864 alone were over £60,000 which would be more that £ 7.5 million today’s money .

The good times continued into the 1870s, but there were problems ahead. The price of lead started to fall, while the price of coal needed to keep the pumping engines running rose. Reserves of lead were starting to run low. Zinc, the other metal mined at Minera, also fell in price. This meant that by the late 1890s, mining at Minera no longer made much economic sense.

In 1909 the mining company decided the pumping engines were too expensive to run. The mines started to flood and in 1914 and lead mining stopped. It was the end of an era for Minera.

Mining left enormous spoil heaps which up until the 1950s were worked for gravel, leaving a toxic landscape with heavy metals like lead, zinc and cadmium posing a threat to water supplies and public health. Wrexham Maelor Borough Council and the Welsh Development Agency devised a scheme to make Minera Lead Mines safe.

Work started in 1988 to make the area safe, and hidden beneath the spoil heaps was found evidence of the old lead-mining industry. The reclamation continued, uncovering Minera’s past and items were stored and some can be seen today in the small museum /visitor centre on the site.

Nature has now returned to the once thriving industrial area giving visitors the opportunity not only to learn about the mining heritage of the area but to enjoy the natural landscape encompassing 53 acres of grassland and wooded areas. The archaeologically recovered remains of the lead processing areas from the 18th and 19th centuries can be explored, as well as the restored beam engine house, winding engine and boiler houses.

Groundwork North Wales is encouraging people to visit Minera Lead Mines and Country Park to appreciate the industrial heritage of the area, participate in activities and discover an interest in heritage. More information about events and activities can be found at www.groundworknorthwales.org.uk/minera also, visit the minera facebook page see @visitminera for details.