Wrexham Cemetery, in Ruabon Road, Wrexham, is a place where you can discover amazing stories about the town’s heritage, and the people who became part of that heritage. The Friends of Wrexham Cemetery, supported by the Heritage Lottery Fund, invite you to explore Wrexham Cemetery.

The Friends of Wrexham Cemetery website, https://www.wrexhamcemetery.co.uk/, and the Facebook group at https://www.facebook.com/groups/wrexham.cemetery/, were created to share the history and heritage of the town through the stories of the people who made it happen. You can look up the history of people buried there. You can add your own stories, and share your photographs, for locals, for visitors, and for posterity. No story is too small. Every contributor is fully credited. 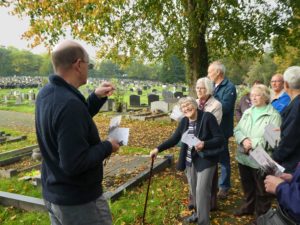 Wrexham Cemetery Location – Wrexham Cemetery is an open space off Ruabon Road, between the B5099 and A5152, with two sections – an old Victorian area, which is mainly kerbed with a winding path, and a modern section, laid out in rows divided by access paths. The graves are laid to grass, and the grounds are bounded by houses, a college, an industrial estate, and a railway line.

The Cemetery boasts several historical and Listed buildings and structures, such as the lodge and chapel (which was restored in 2017) which dominate the entrance (Grade II Listed Buildings); the railings and piers to the Cemetery entrance and boundary walls; and Wats Dyke, a Scheduled Monument, which follows the line of one of the internal paths crossing the site. The Cemetery is on the register of Historic Parks and Gardens of Wales.

The first sight which greets visitors at the main entrance on Ruabon Road are the twin Gothic chapels, designed by local architect William Turner, with their central connecting archway, tower, and spires. There is also a lodge building, but that is privately rented. The east section of the Chapel houses a reception and research area, welcoming to public to find out more about the Cemetery, graves and family history. The west Chapel is used for services, events, group visits and educational purposes. 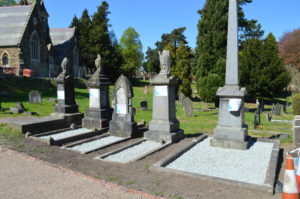 Wrexham Cemetery’s plots can be broken down into a number of themes, each reflecting one aspect of life in Wrexham over the years. These themes include:-

World Wars: The dead from both World Wars are respectfully buried in Wrexham Cemetery. The Cemetery itself is a focus for Remembrance Day activities each year on November 11.

Polish Community: Wrexham’s loved and respected Polish dead are also interred here. The Polish community, fleeing the Nazis in 1940, were welcomed to Britain with open arms, and it was here that they did their bit to ensure Britain’s victory in World War II.

More than 1200 Polish people are buried in Wrexham Cemetery, including 40 Polish servicemen who gave their lives during WWII. Wrexham’s Polish community commemorates their fellow countrymen, who can never go home again, and Wrexham Cemetery organises regular educational activities such as Polish graves walks.

Sports: Wrexham’s historical connections to soccer go back to 1864, when Wrexham Cricket Club took up playing soccer to give them a game to play during the winter months. Wrexham Football Club is the oldest in Wales and 3rd oldest professional club in the world.  From their first game in October 1864 in Denbigh, to the present day, Wrexham has had a proud football club with a long history – and many of Wrexham’s footballers lie in the Cemetery, such as Horace Elford Blew, full-back for Wrexham Football Club and the Wales International team, who only made two Football League appearances, but who earned 22 caps for Wales and was an automatic selection for the team between 1902 and 1909, ultimately retiring to become Mayor of Wrexham; and Tommy Bamford, Wrexham Football Club’s all-time top goal scorer, who scored 201 goals in all competitions between 1928 and 1934 and who, In the 1933–1934 season, set another club record which still stands today – scoring 44 league goals, and fifty in total for the season.

Industry: Wrexham’s industrial roots go back to the Romans’ lead mines in Minera, but two of the names which stand out the most are “Iron Mad” John Wilkinson, and John Henry Darby of Coalbrookdale, both of whom are pivotal in one of Wrexham’s most important historical industries – iron, and later steel. Mr Darby himself is buried in the Cemetery. Brewing and coalmining are two other industries which have strong representation among the people buried in the Cemetery; the founders of the Island Green Brewery, and the survivors of the Gresford Colliery Disaster of 1934. 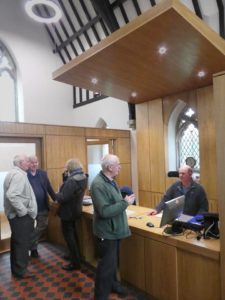 The Cemetery is open to the public between 10am and 4pm during the winter, and 10am to 6pm during the summer.

If you are looking for burial information then please visit the Wrexham Council website, or ring 01978 292048. For other enquiries please contact Cemetery Development Officer, John Whittaker on 07753 771645, or email John.Whittaker@wrexham.gov.uk