CADW’s decision to add Caergwrle Castle to its portfolio is good news for the future preservation of the monument. Although it stands in ruins today, Caergwrle Castle is closely associated with key events in Welsh medieval history. Its story is entwined with that of the legendary conflict between the Welsh Princes themselves and with King Edward I of

England. This largely overlooked story is rather like a Game of Thrones fought out on Welsh soil: it has the potential for an epic film. 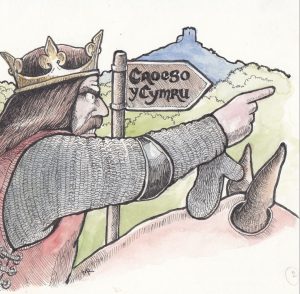 of Wales, refused to pay homage to and promise to obey the new English ruler, King Edward I.

In response to this defiance Edward’s forces attacked Wales. 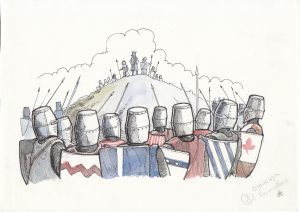 Llywelyn was surrounded in the mountains of Snowdonia and stripped of most of his lands but he was allowed to retain the title of Prince of Wales.

Llywelyn’s brother and rival, Dafydd, had hoped to gain from Llywelyn’s defeat and fought on the English side.

His prize included the Lordship of Hope. Between 1277and 1278 Dafydd built his castle at Caergwrle. Edward provided some funds to assist with the costs. The Castle was borne out of princely rivalry and conflict with England.

In 1282 Dafydd changed sides and decided to attack the English. His men blocked the well and did their best to knock down Caergwrle Castle to make it difficult for the English to use as a base against the Welsh.

On Palm Sunday 1282, Dafydd attacked and captured the English-held castle at Hawarden. The Welsh rose up against the English and Llywelyn joined in.

Edward I’s English troops invaded Wales for a second time. Llywelyn was killed at Builth Wells. Llywelyn’s head was sent to Edward I at Rhuddlan Castle and was later put on display at the Tower of London.

Dafydd was captured and was taken to Shrewsbury where he was hanged, drawn and quartered. He was the first person in British history to receive this penalty for the crime of High Treason. 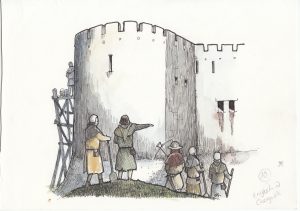 During this period one shilling was paid for each of 27 Welshmen’s heads which were taken to the Castle.

In the course of the conflict Edward I brought the rest of Wales under English control, ending Welsh independence. Caergwrle Castle had played a pivotal role in even 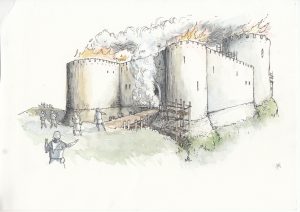 ts during this period.

On 14th February 1283 Edward gave Caergwrle Castle to his consort, Queen Eleanor. However, an accidental fire damaged the Castle on 27th August 1283. The heyday of Caergwrle Castle was over. The story of the Castle is intrinsically linked with the story of Wales itself during a one of the most crucial periods in its history.