North East Wales has around 30 hillforts, predominantly dating to the Iron Age period, c 800 BC to c 43AD, although some have earlier origins and some are reused after the Roman period. Some mentioned and described by antiquarians such as Edward Lhwyd and Thomas Pennant, one is even illustrated in a Humphrey Repton ‘Red Book’. Despite being over 2000 years old many of them still form very visible features in the landscape. Over the years there have been a number of excavations taking place in hillforts in the area. Amongst the earliest are those of Wynne Ffoukes in the 1840s. He spent a week at each of three sites in the Clwydian Range following the discovery of a hoard of 1500 Roman coins from Moel Fenlli ( a few of which are displayed at Wrexham Museum). The sites examined were Moel Fenlli, Moel y Gaer Llanbedr and Moel Arthur and the results were published promptly in Archaeologia Cambrensis…a journal which continues to be published today.

In the middle of the last century there were a number of more major excavations at hillforts in the area…all of which were a response to damage which was planned to take place. Dinorben hillfort above St George near Abergele has now been completely quarried away but in excavations initially in the 1910/20sand then in the 1950s and 60s extensive work took place, published by Hubert Savory. The site was a limestone hill and the hillfort was quarried away to provide the stone for the steel making process at Shotton. Similarly the limestone hillfort of Moel Hiraddug overlooking Dyserth has been partly quarried away and excavations took place both by Bevan Evans, archivist for Flintshire in the 1950s and 60s and in the 1980s by Jeff Davies, Kenneth Brassil and Graeme Guilbert. Preservation was good at Moel Hiraddug and remains of bone implements as well as bronze horse fittings were found. Houses were also excavated and there is evidence for the origins of the site belonging in the Bronze Age. Finally in the 1970s there were proposals to build a reservoir in the hillfort of Moel y Gaer, Halkyn Mountain. Prior to the construction of the reservoir a fifth of the interior and a large stretch of rampart were excavated under the direction of Graeme Gilbert. Evidence for 3 successive villages were found, again with the earliest evidence going back to the late Bronze Age.

Focus shifted away from hillforts in this area with more academic study concentrating on sites in the south of England. However in the early 2000s Denbighshire County Council led a large multidisciplinary project called Heather and Hillforts, largely funded by the Heritage Lottery Fund (HLF). This turned back emphasis onto 6 major hillforts in the Clwydian Range and Llantysilio Mountain. The six hillforts looked at were Penycloddiau, Moel Arthur, Moel y Gaer Llanbedr, Moel Fenlli, Moel y Gaer Llantysilio and Caer Drewyn. The Lottery funded project was largely about looking after the two assets, hillforts and heather, management of sites and habitats and raising awareness and reconnecting people with the sites. Very little archaeological excavation took place within the project as research is not generally one of the remits of HLF. There were three small excavations all linked to understanding erosion which was taking place at Penycloddiau, Moel y Gaer Llanbedr and Moel y Gaer Llantysilio.

However whilst the Heather and Hillforts project was taking place several universities began to take an interest in the Hillforts. Initially Bangor University, where Professor Raimund Karl led a small excavation at Moel y Gaer Llanbedr and also excavations at the small hillfort of Moel Fodig which is very close to Caer Drewyn near Corwen. More recently Professor Gary Lock from Oxford and Dr Rachel Pope from Liverpool have been very active in the area at two sites towards the north of the Clwydian Range. Gary Lock, along with Dr John Pouncett, have been working at Moel y Gaer Bodfari, a site just to the north of Moel y Parc which was not included in the Heather and Hillforts project while Rachel Pope and Richard Mason have been leading a student training excavation at Penycloddiau. Both of these hillforts are privately owned and it is down to the generosity of the owners that work can take place. Both sites are also Scheduled Ancient Monuments and permission for the work has been given by Cadw.

At Moel y Gaer initially an area close to the main entrance to the site was excavated where a geophysical survey had su
ggested that there was a house. Excavations showed that indeed there was a house which was in turn surrounded by a stone wall….almost like a garden area…the surrounding wall was dated by radiocarbon dating to the mid 4th century BC. A large trench was excavated through the ramparts of the site which demonstrated that what looks today like a grassy sloping bank was originally an extremely well-constructed dry stone wall with several building phases to it. In 2017 a large new trench was opened in an area where a possible second hillfort entrance was located. This had been suggested by Rev Stapleton who had excavated at the site in the early 1900s. Within a very short time of opening this trench it was pretty clear that indeed there was an entranceway, previously unidentified. The work in 2018 will examine this further. 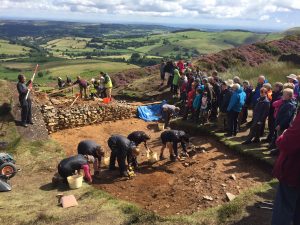 At Penycloddiau, about two miles south of Moel y Gaer Bodfari, for the last six years Liverpool University Archaeology students have learnt all the principles of archaeological excavation whilst uncovering a large section through the rampart and ditch on the north eastern side of the site as well as excavating the site of a round house. The rampart at Penycloddiau is also originally a massive drystone wall, it is a box rampart, almost like early gabion construction…the rampart is about three metres wide with an associated ditch of a similar depth, between the rampart and ditch there is what seems to be a walkway. Radiocarbon dates are currently being obtained with some funded by the local community in nearby Llandyrnog.

Both of these excavations at Moel y Gaer Bodfari and at Penycloddiau have their final season of work taking place in summer 2018. There will be organised walks to take people to visit the excavations and find out what is being unearthed at both sites. Moel y Gaer Bodfari has an open day on Sunday July 29th while Penycloddiau has two open mornings on Wednesday July 25th and Wednesday August 8th. Details will be posted on this website, and in the Denbighshire Countryside Out and About booklet and website nearer the time. Watch this space for details.