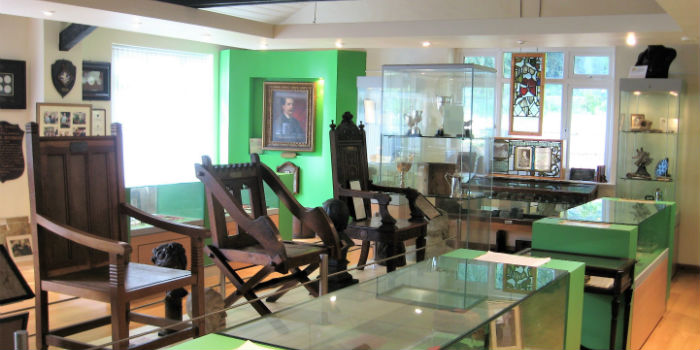 Most of you reading this will have heard of the ‘Stiwt’ in Rhos, but not too many are familiar with another Institute just a few miles away, this one being even older, with an equally fascinating history…….. and no less a figure than Lloyd George described the Ceiriog Memorial Institute as ”the best of its kind that I know anywhere.”

Opened in May 1911, the village Institute in Glyn Ceiriog was founded by Sir Alfred T Davies and erected by public subscriptions as a lasting memorial to the famous local poet John ‘Ceiriog’ Hughes, and other notable Welsh dignitaries. Situated on the village High Street, the Institute is at the heart of the community, holding meetings, concerts, choir rehearsals, Welsh language classes and social functions, as well as containing a fascinating museum – recently refurbished – displaying many unique exhibits relating to the Ceiriog Valley and beyond.

These include a treasured collection of stained glass windows commemorating characters from Welsh history, with the main window featuring Ceiriog and two other local poets – Huw Morris and Cynddelw. Also contained within are many portraits and sculptures; a large number of items relating to the industrial heritage of the Valley (including the Glyn Valley Tramway); a collection of Eisteddfod Chairs; an impressive display of Holy Bibles; samples of the poet Ceiriogs work; bookcases donated by the Welsh communities in Patagonia; and much much more.

As a testament to traditional Welsh values and heritage there is no better example throughout the land – just ask Lloyd George! Or indeed Jan Morris, who in her book ‘The Matter of Wales’ , describes the Institute thus ”….it stands there still, and remains in an almost fossilised way a very repository of Welsh chapel and liberal values……full of literary and religious mementoes…. the whole maintained with loving diligence….and some essence of confident piety no longer readily available.”

Run by a volunteer Committee, the building also contains a Main Hall seating 200, modern kitchen, and a Snooker Room. The Hall, kitchen, and smaller meeting rooms are available for hire throughout the year, and visitors are welcome by prior arrangement (or when the museum is opened on Saturdays throughout the summer months). Recent building repairs and maintenance work has ensured the Institute remains pivotal to the local community, but visitor contributions and donations help enormously towards the general upkeep.

The Centenary celebrations in 2011 drew in many visitors, with Huw Edwards (BBC newsreader) as guest of honour, and the Institute looks forward to welcoming many more people through its doors in the coming years – come and visit the (less well known) Stiwt yourself!